December is the time of the year when winter comes to the Northern Hemisphere. The days are getting shorter, the temperatures are dropping, the areas are covered with snow, and the trees have no leaves. It seems that the nature is at rest, it has entered the winter sleep. But that is not quite so. Many animals do not migrate or hibernate – on the contrary. They are active and awake throughout the winter until the arrival of warm spring days. Let’s see what happens to some of our animals during winter. 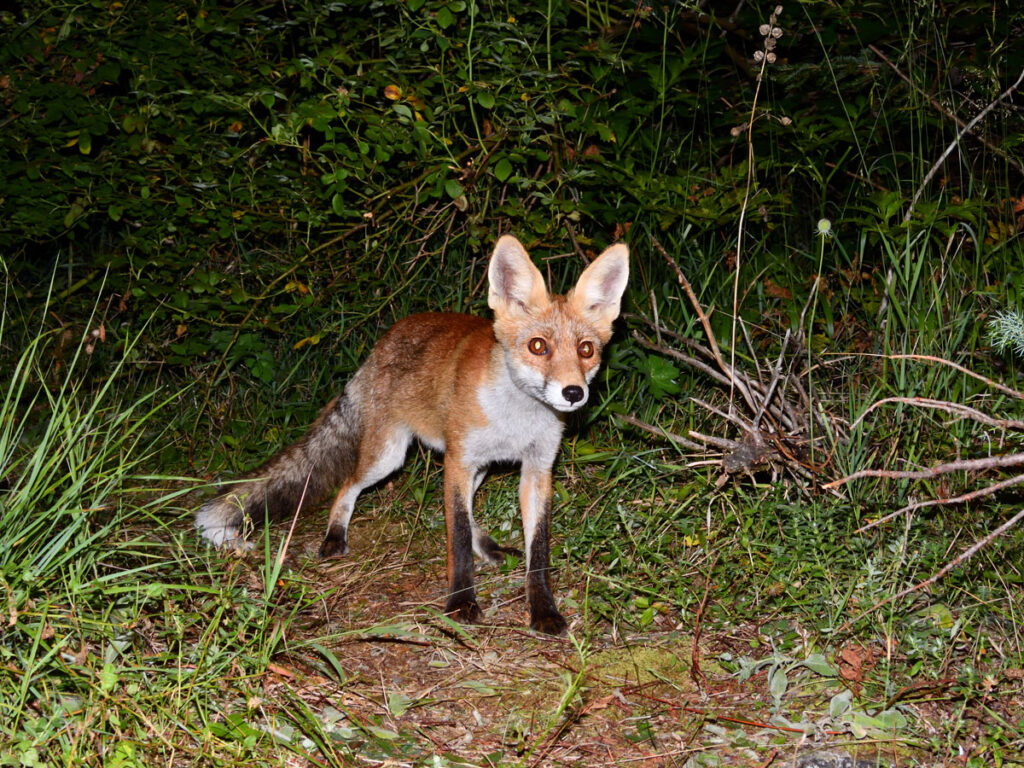 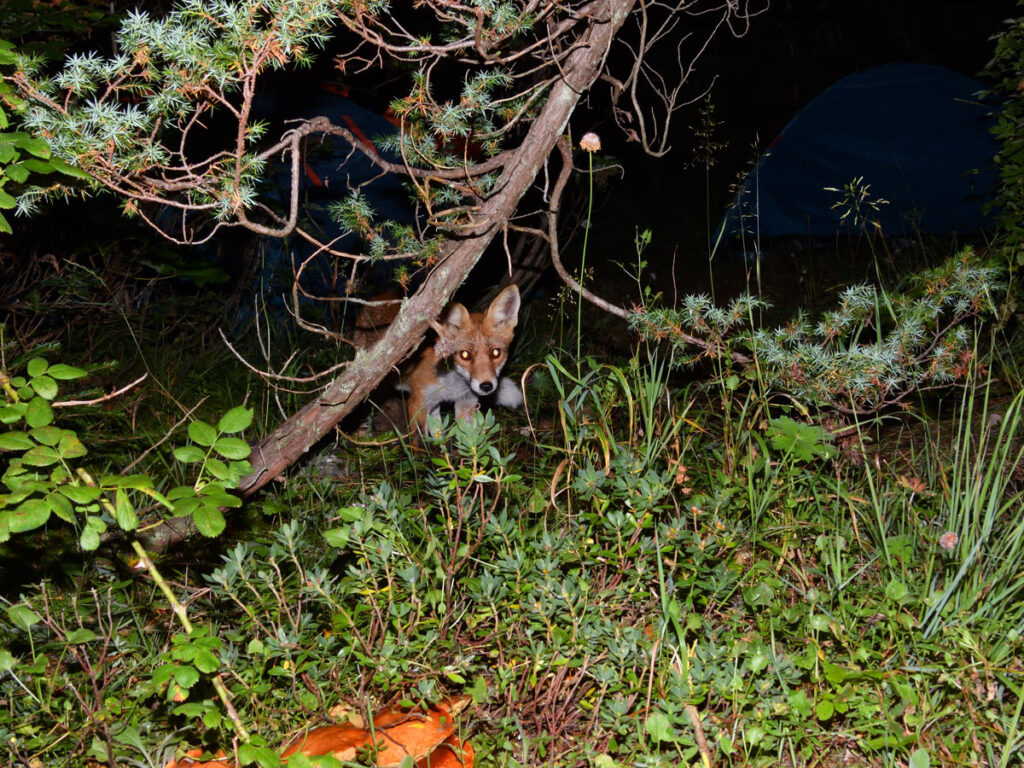 Unlike bears, the foxes do not hibernate in winter. In fact, the low temperatures hardly change their behavior and routine. On very cold days, the foxes spend time in the sun in order to warm themselves, but during extreme weather they seek shelter. During winter, the foxes develop winter fur that is thicker and provides good protection from the cold. They spend most of the day looking for food, until they start using a den in which they give birth to young. It is not uncommon to see a fox sleeping outdoors under a thin layer of freshly fallen snow. The mating season begins in January and lasts till early March. During this period of the year the foxes are usually grouped in pairs and sometimes they can be also found in larger groups. The main problem in winter is the lack of food. It often happens that foxes enter villages and private yards in search of food. 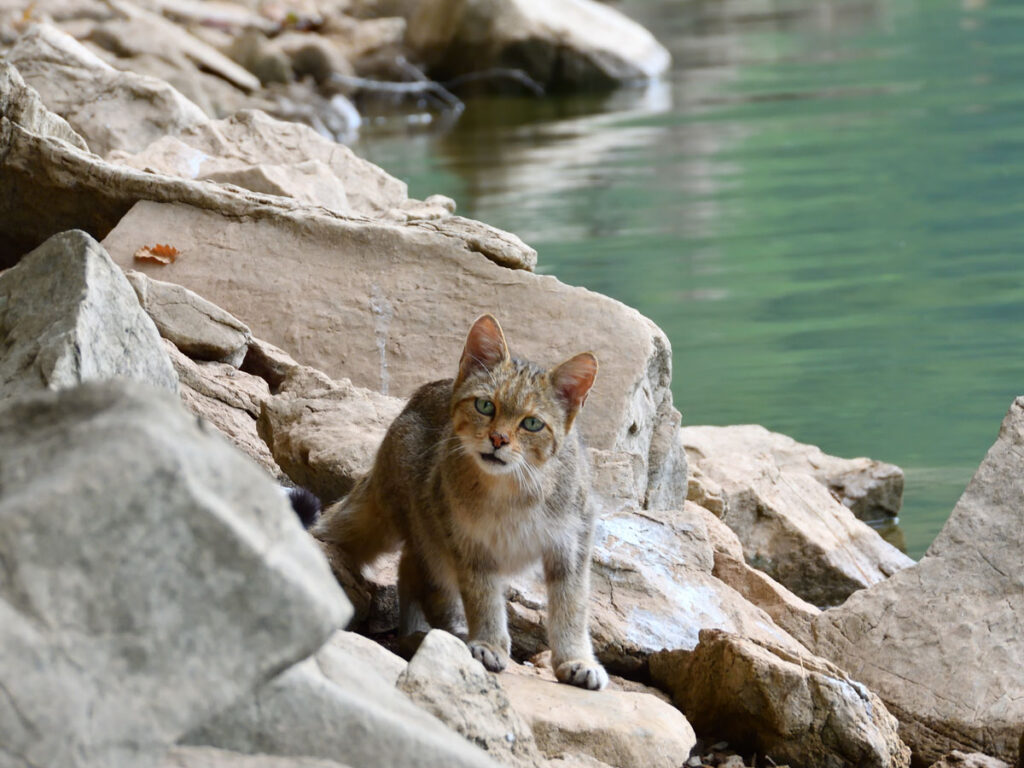 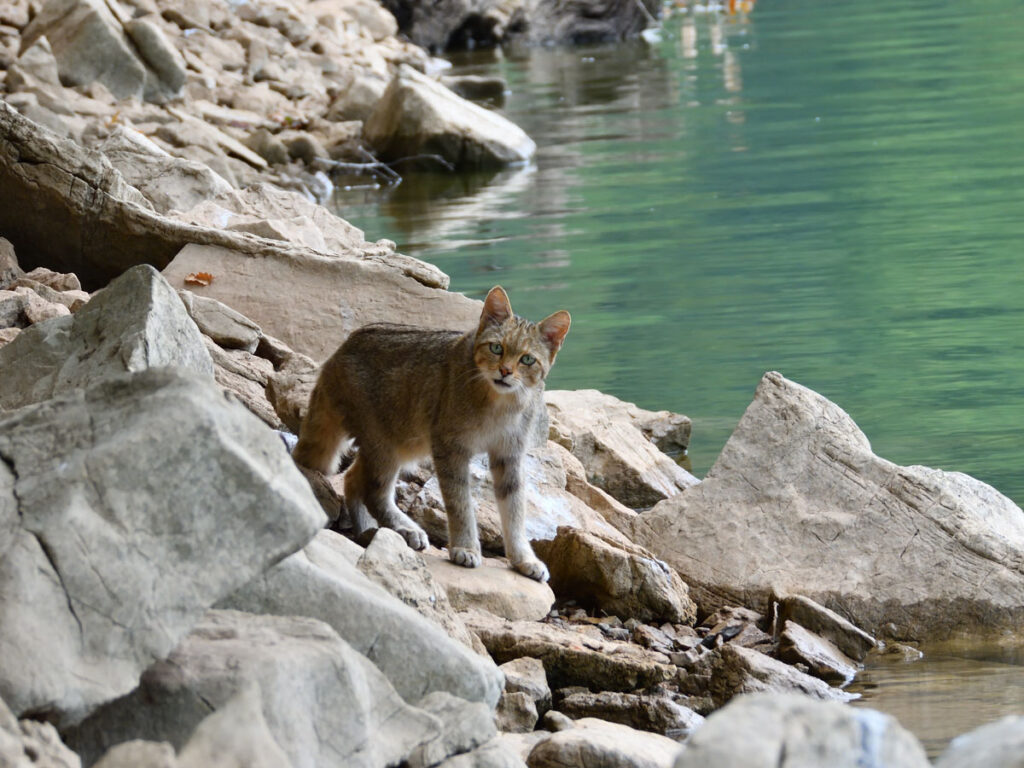 The wildcat prefers to be active at night. They are solitary animals, which means they spend most of the year alone, except during the mating season and when they have young. The wildcats have 2 estus cycles per year – December to February and from May to July. During the winter months the males enter the female territory in order to mate, but they do not help in caring for the young. The females have smaller territories they guard better from intruders. During the day they spend their time hiding in the crevices of trees, crevices in rocks or in dense bushes, while they usually hunt at night. When the deep snow prevents them from traveling longer distances, they remain in the den until the conditions improve.

The gray heron is a common bird species that inhabits most of the Palearctic (Europe, most of Asia and Northern Africa). They feed on fish, amphibians and small mammals, which they hunt in shallow water, swamps or in flooded fields. In the summer months they come together in large colonies and make many nests on one or more adjacent trees thus building a colony, while the winter months they spend alone. They are not migratory in the true sense of the word, but at extremely low temperatures, when the water is frozen and there is not enough food, the gray herons fly south to places where there is no ice.

This is a common species of songbird that inhabits almost the entire territory of Macedonia. It prefers deciduous or mixed forests with well-developed shrub vegetation. It builds nests mostly in dense bushes or low trees. The inexperienced bird watchers will have difficult time spotting this bird during warmer months, but in winter, when conditions are harsher and there is less food, the long-tailed tit come together in flocks that sometimes include several dozen birds and then it is much easier to spot them. Winter is the best time to observe these birds because they descend from the mountains and often appear in city parks, yards or balconies in search of food. When temperatures are extremely low, these birds can use abandoned nests or small holes – many birds will enter these nests or holes, they “hug” and warm each other.

The great tit is a frequent resident of urban parks, gardens and yards. It builds nests in closed places such as holes in trees, poles, various openings and even mailboxes. With its yellow abdomen and black head, the big tit is one of the most recognizable songbirds in our country. It feeds on small insects or their larvae, but also on seeds and small fruits. Same like the long-tailed tit, the great tit does not migrate in the true sense of the word. The adults retain their territories throughout the year. Only in case of extremely low temperatures they flock down to the lower parts, or to the south in search of food. The food shortages are the biggest threat in winter. Sudden frost or snow often causes mass plague, especially of young birds. If you set up a bird feeder in the winter this species will probably be one of the most frequent visitors.

The hazel dormouse is one of the largest ‘sleepy heads’ in nature. It spends the winter months hibernating in tree hollows, caves, abandoned buildings or attics. The hibernation duration varies from region to region and generally increases in proportion to the geographic latitude. On average, the hibernation period lasts between October and May, although it varies greatly depending on food availability. Even in the summer months they spend most of the day sleeping, only to look for food during very short time periods. One study found that in the summer months, the hazel dormouse is active in average of 200 minutes per 24 hours. They live in deciduous forests, usually oak or beech forests and prefer places where there are rocks with cracks or caves. They are well-adapted to life where there are people so they often substitute the cracks and caves with birdhouses, ceilings and openings in walls. They feed on berries but are adaptable and sometimes can eat insects.

Unlike the hazel dormouse, the yellow-necked mouse does not hibernate and is active all year round. Sometimes several individuals are warming up in some crevice in order to preserve the heat. It is extremely good at climbing trees and bushes, but most of the time this animal is on the ground. It lives in holes in trees or in hollows within stumps or logs, bird houses and sometimes even settles in human buildings. These animals build canals in their lairs that have many corridors and openings and in which they spend the winter months feeding on stocks of acorns, hazelnuts and other fruits it collects during the warmer months. The fruits that will not be eaten often germinate, thus helping in spreading the forests. The yellow-necked mouse is mostly active at night and exits the den in search of food. They have relatively small territories with an area of ​​less than half a hectare in which they spend their whole life.