Is it worthwhile saving the endangered species?

During the twentieth century, the number of bearded vultures in Europe decline to its historic minimum. It seemed that this bird would disappear completely from Europe given the fact that it was almost completely extinct from the continent. The remaining bid populations were in continuous decline as well.

Today, things are different. The extensive protection as well as the efforts for reintroduction into the wild, have led to slowly recovery of the bearded vulture population. However, with less than 150 couples, this bird remains one of the rarest and most endangered on the continent.

We are constantly hearing stories from all over the world. Whether it is tigers, polar bears, pandas, coral reefs, koalas or some plants, much of the planet’s wildlife is under threat. As nature lovers, news like that is always sad, stressful, exhausting and depressing.

It is therefore worth asking ourselves: is it worthwhile to take care of it all? Of course it would be sad if there were no more rhinos on the planet, but it is not that humanity depends on them. Additionally, of course, it is more important to take care of people, and we can all agree that we have our own problems. Then why spend millions of euros in protecting endangered animals?

A 2012 study found that 76 billion US dollars a year are needed in order to protect all the terrestrial animals. Rescuing marine species can cost even more. In this regard, it seems that it might be more logical to direct the funds intended for wildlife protection to feeding the poor, finding cures for serious diseases, etc. It can be really difficult to understand why we should invest money to protect species like the wolf, which in turn can cause harm to farmers. Aren’t there some species without which our life would be easier?

Animal and plant species are constantly dying out. About 99 percent of all species that lived on planet Earth became extinct, most of them many millions of years ago. So far there have been five mass extinctions events where a huge portion of the life on Earth disappeared in a relatively short time. The extinction is a natural process that takes place regardless whether humans are involved or not. Then why bother at all?

One answer to this question is because species are now dying out much faster than before. Some research suggests that the species extinction has accelerated a hundredfold in the last century alone, and that seems to be our fault.

Nevertheless, there is another reason why are we protecting the endangered species: because that is what we want do to.

Many of us love nature. We think animals are beautiful, graceful, fascinating. We love hiking in untouched nature or diving into a bay full of sea life. Nature is magical and aesthetic value in itself, which is a reason enough to preserve it. However, the first problem with this argument is that this deprives the right to life all those species we do not like, those that are not as cute as pandas, or those that we can never see, such as underground animals. If we keep only the animals that are attractive to our eyes, in that case the worms, snails, spiders and scorpions will be the first to go.

So the fact that nature is beautiful for some of us will not “do the job”. There must be a more practical reason why keeping alive the species we brought to the brink of extinction. 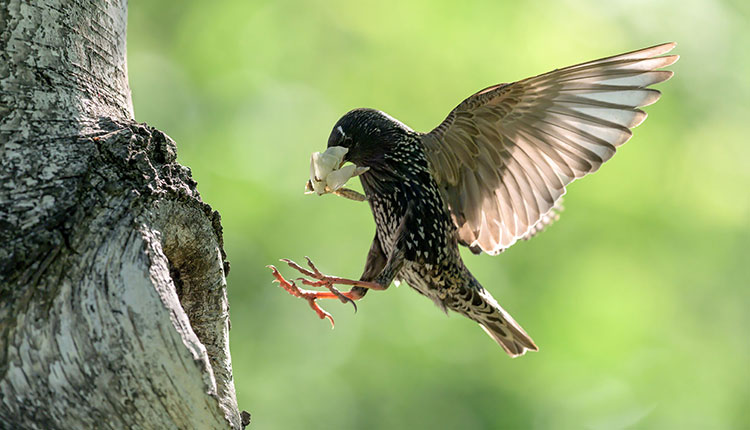 In the 1990s, the biologists began to list all the benefits from the wildlife and plants. These benefits, which most of us take for granted, are called “ecosystem services”. Some of them are obvious, the plants together with the photosynthesized plankton give us the oxygen we breathe, the bees and the bumblebees pollinate a large part of the plants. But in addition to these obvious examples, there are many others that are much, much more subtle.

A 1997 study found that the biosphere provides services equal to 33 trillion dollars a year. By comparison, the entire global economy at the time produced about 18 trillion dollars. Five years later, the same team of researchers calculated that the benefits of biodiversity conservation would exceed the cost by a factor of 100. On the other hand, letting the species become extinct would wipe out 18 percent of the world economy by 2050.

You are probably thinking now that this kind of rhetoric and looking at things through the lens of money is cold and heartless, without any love for nature that we discussed above. Well, many other people who care about the environment feel the same way.

Assigning value to the ecosystems opens up the possibility of misinterpreting the relationship between ecosystem services and any interventions or investments that will destroy it. Indeed, such a system is vulnerable to abuse, but without it, abuse certainly occurs, which is just one more reason why more and more people are accepting this system.

One of the good things about ecosystems is that they are comprehensive. As a result, all the weaker arguments we raised above are now beginning to make sense.

Let’s go back to the fact that nature is beautiful and that we want to protect it because of its aesthetics. Our pleasure that comes from the beauty of nature can now be taken as an ecosystem service. The question that would now arise is: how can we objectively measure the value of beauty? The answer is: we cannot, but that does not stop us from putting a price tag on it. This is something we always do with music, works of art and historical artifacts. If we value something that is rare and we are willing to pay for it, then that thing has a price. If we want to do the same thing with nature, we just need a system that will charge us to experience it.

The simplest example of this is ecotourism. Let’s go back to the bearded vultures we mentioned at the beginning. The people who organize bearded vulture sightseeing tours are motivated to protect these animals. Vultures are their primary source of income and organizing such tours brings them more income than other professions they would work in, such as agriculture. However, organizing tours that go through untouched nature on continuous basis is a challenges in itself, but there are a number of measures that would reduce such negative impact. In general, ecotourism makes it possible to charge fees for the beauty of nature in order to protect it.

However, at first glance this seems that we have a selective approach to what we want to protect and what we do not. Let’s save the things that tourists want to see and the bugs that pollinate our plants and let’s forget about everything else – however, it is not quite like that.

Let’s take the bearded vultures example again. They live in high mountainous rocky areas and feed almost exclusively on bones. If we want to protect them, we must first protect the wild ungulates that serve as their food and live in those areas, such as chamois or Alpine ibex, but also predators such as wolves and lynx, which in turn leave the bones from their prey. In order to protect these animals, we must provide natural and preserved forests, rivers, etc. These natural landscapes provide a home for a number of other organisms that will live there in uninterrupted manner. If someone comes and builds an open pit mine nearby, the effects will be felt throughout the food chain.

The bearded vulture is part of a chain and it is impossible to separate it from other species. Removing one species may not make a difference but it can cause a series of changes that will alter the entire landscape. It is really difficult to see the effect of removing single species, except when we have already removed it, and then it is too late to reintroduce it.

There is an overall scientific consensus that the ecosystems with greater richness of species are more resilient and more stable. And this is the key point. A small subterranean worm may not do anything obvious and beneficial to humans, but it probably supports the ecosystem in which it lives, and that ecosystem in turn serves us.

Finally, many researchers and conservationists believe that we cannot preserve the nature without first making assessment how will that help us, because all conservation measures depend on the public support. Equally, we cannot help ourselves without protecting the nature because we need nature for so many things. In some cases we will have to choose one or the other, but mostly we will have to do both.

A good way of looking at things is to imagine the man and the wild as an inseparable whole. This does not mean that we have to save every species that currently live on the planet, we cannot do that even if we wanted to. Nor does it mean keeping things unchanged, because that is also impossible. That means ensuring a richer and more diverse ecosystem – an ecosystem that will be good for the wild species and good for us.

Автор: Ненад Петровски
Born in 1993 in Skopje. He started his studies in 2012 at the Faculty of Natural Sciences and Mathematics in Skopje, Biology Department with module in Ecology. Since 2013 he is a member of the Research Society of Biology Students where he gains work experience with fungi, plants and birds. Since 2018 until today he works in the Macedonian Ecological Society and is coordinator of activities related to study and protection of vultures in Macedonia.

Only through education can we solve the global challenges

The pandemic has made people appreciate clean nature

Modern life with a smaller ecological footprint is possible and real