We are paying – they are getting rich

A fairytale for only a few

In addition to common history in Yugoslavia, the citizens of Macedonia, Serbia and Bosnia and Herzegovina share one more thing in common. They have become victims of the strong energy lobby which, at the beginning of the 21st century, ‘smuggled’ a statement that the construction of small hydro power plants is an ideal way to increase the production of the so-called clean or green energy that will not pollute the natural environment. High goals were set when it comes to increased generation of electricity using renewable energy sources and this was used as a justification for subsidizing the operation of the small hydropower plants.

Our research has shown that the effects of these policies are devastating and that the main benefits are going to individuals and companies – they are getting rich at the expense of citizens and, in doing so, many of them destroy the environment.

We are funding “money-making and destruction machines”

The number of small hydro power plants that are subsidized in Macedonia increased from 5 to 90 during the period 2010-2019. 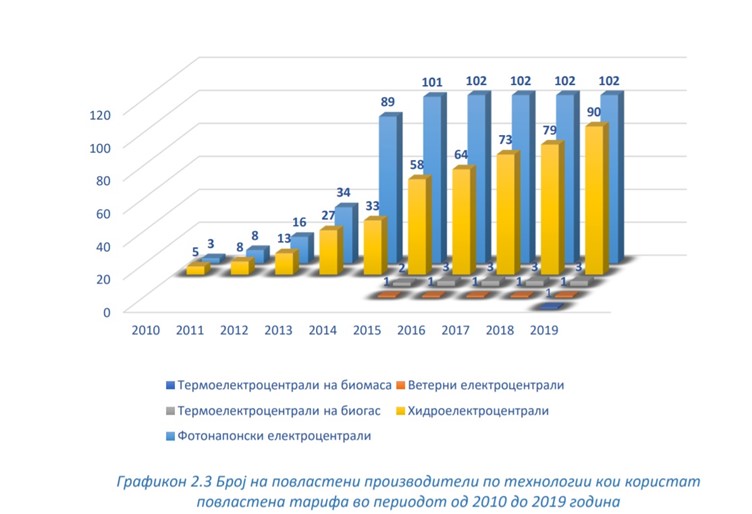 Flow of the money 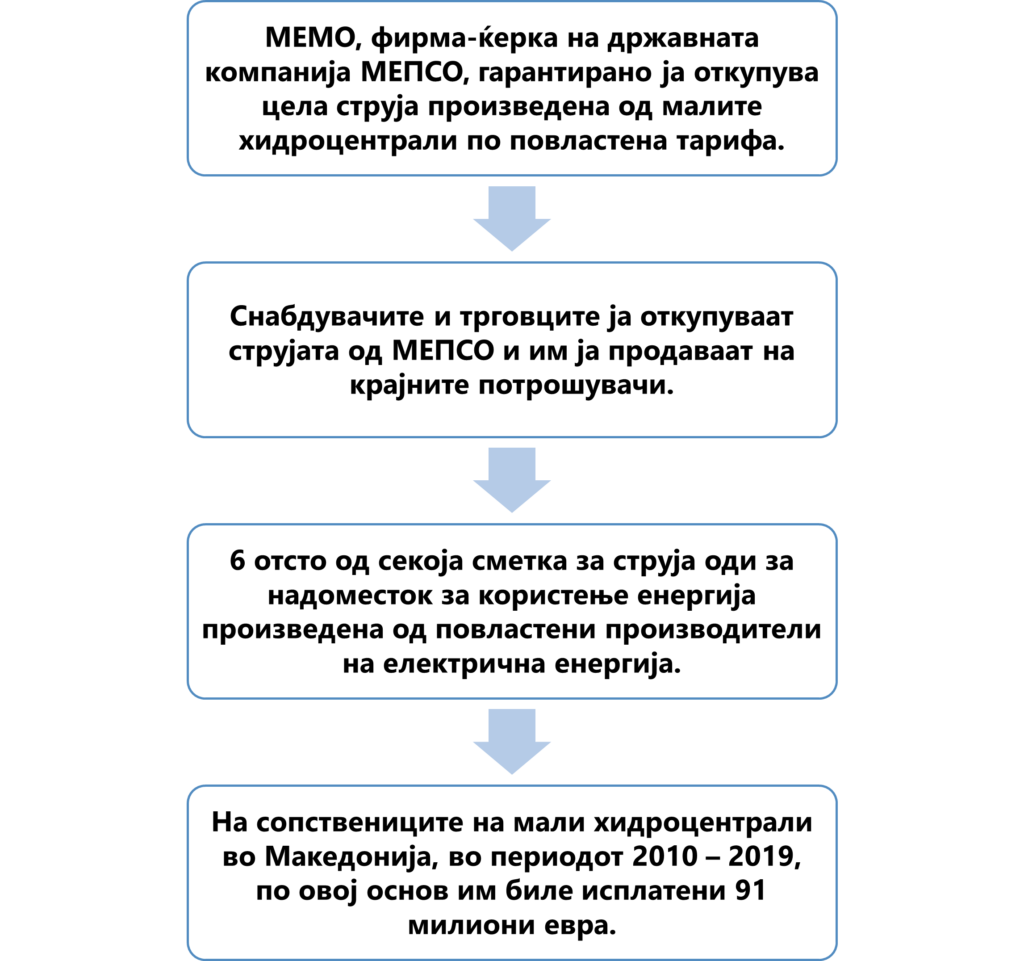 The example below shows the share the market participants have in the fee paid by the final consumers: 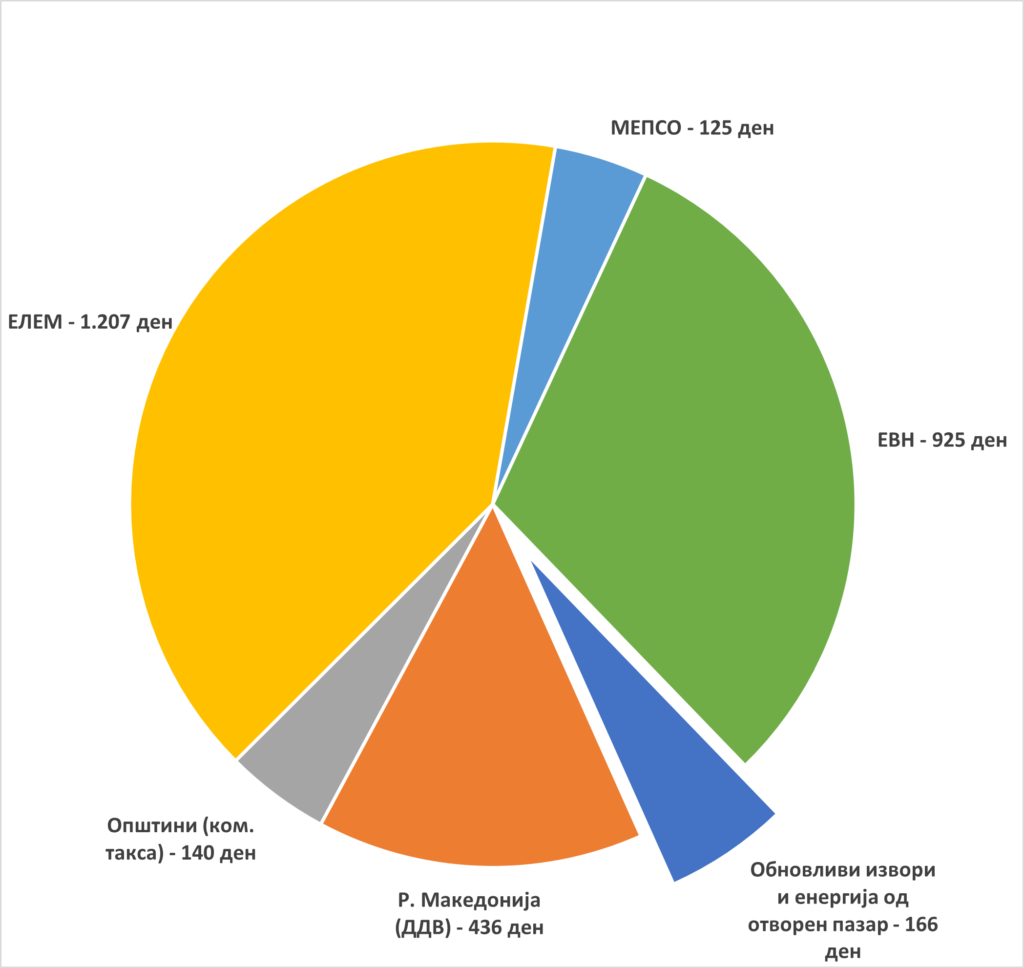 Example 1: Share of the market participants in an average household electricity bill in the amount of 3,000 denars. Source: EVN

Throughout the period of implementation of feed-in tariffs, except in 2015, small hydropower plants dominate in terms of how much money was paid for electricity generated in comparison to other types of power plants.

What is a feed-in tariff?

In order to find out more how this money is allocated, that is, who profits the most from this business, we asked MEPSO for answers, but they said that the company has signed confidentiality agreements with the preferential producers, that is, with the owners of small hydropower plants, and that they cannot disclose this information. However, we found the names of the companies that generate the highest revenues from this business activity, and the owners include former politicians and large multinational corporations.

Almost identical situation with increased construction of small hydropower plants due to government subsidies is happening in Serbia, Bosnia and Herzegovina and other countries in the former Yugoslavia, or the so called Western Balkans.

Read more: How much money is paid to the owners of small hydro power plants is secret

When citizens receive their electricity bills, they rarely check it in details, and even if they do, they often do not even know where exactly their money goes. Few of them know that six percent of all electricity bills the citizens are paying are intended for subsidizing renewable energy sources – this includes small hydropower plants, photovoltaic systems, wind farms and biogas plants.

Research by the Bankwatch Network has shown that a total of 380 small hydropower plants were built in this region during the period 2009 – 2018. Their number has quadrupled, and this trend continues to this day. It is almost unbelievable that 70% of the money intended to support the generation of electricity from renewable sources ended up in small hydropower plants and their contribution to the electricity supply was barely 3.6%.

“One of the main drivers of the destructive growth of the small hydropower plants in the Western Balkans is the availability of public financial support in the form of feed-in tariffs. Originally conceived as a mean of instigating all forms of renewable energy, including solar and wind energy, the feed-in tariffs in the Western Balkans are disproportionately targeted at small hydropower plants”, says a Bankwatch report.

The wind – much more useful resource

In 2019, compared to 2018, there was an increase in electricity generation from all types of power plants in Macedonia, except from the small hydropower plants, whose reduced generation is the cause of the downward trend in total electricity produced by preferential producers.

According to Regulatory Energy Commission reports, the reason for the reduced generation of electricity from small hydropower plants are the unfavorable hydrological conditions in the country that prevailed during 2019.

In other words, a wind farm in Macedonia has a much greater contribution to generation of electricity from renewable energy sources than small hydropower plants.

The environmental civil association “Front 21/42” points out that we pay the “price” of the small hydropower plants with destruction of valuable and authentic nature, because many of the plants are built or planned in protected areas, even in national parks. Hence, they say that, although the government strategies do not recommend building small hydropower plants in protected areas, due to the threat of cumulative effect of these facilities, in practice the opposite happens.

“None of this is implemented in practice – we are theoretically aware byt practically we continue with plans and projects that destroy the nature”, says “Front 21/42“. 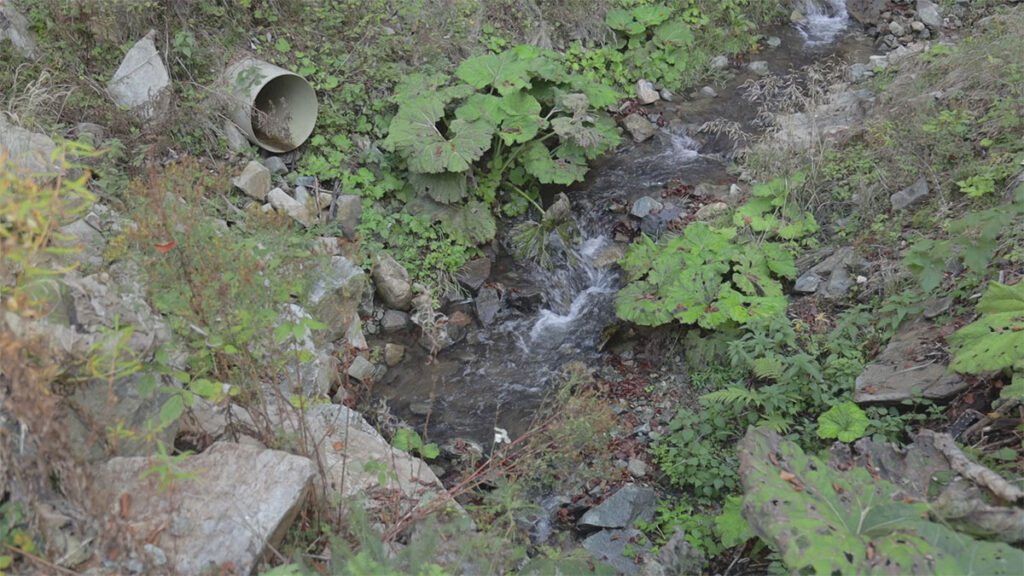 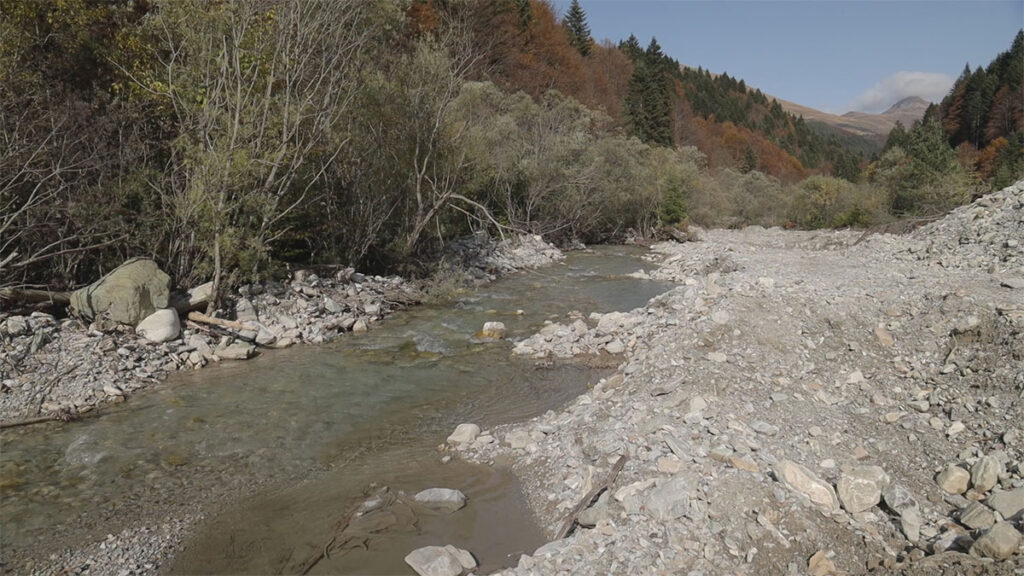 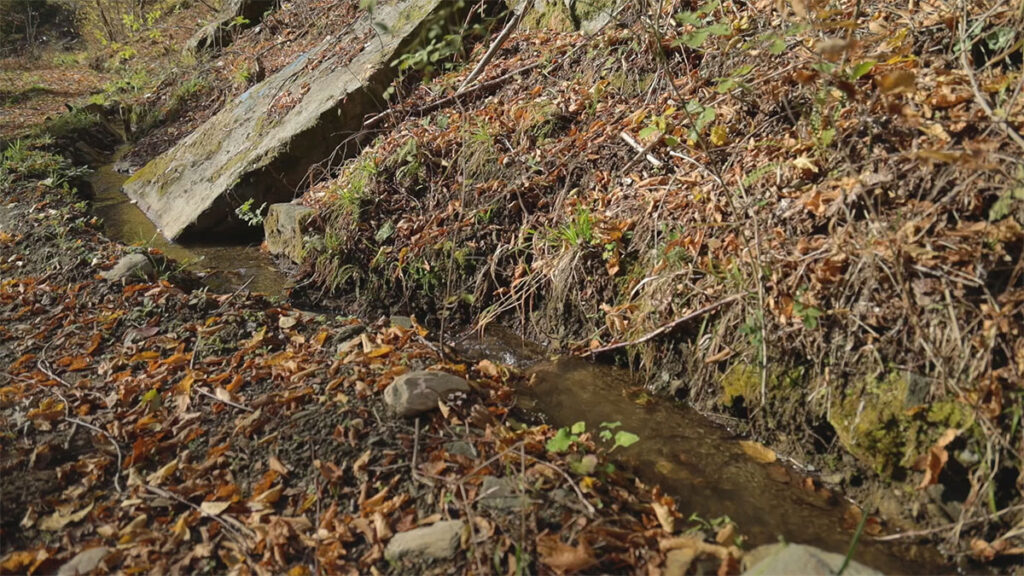 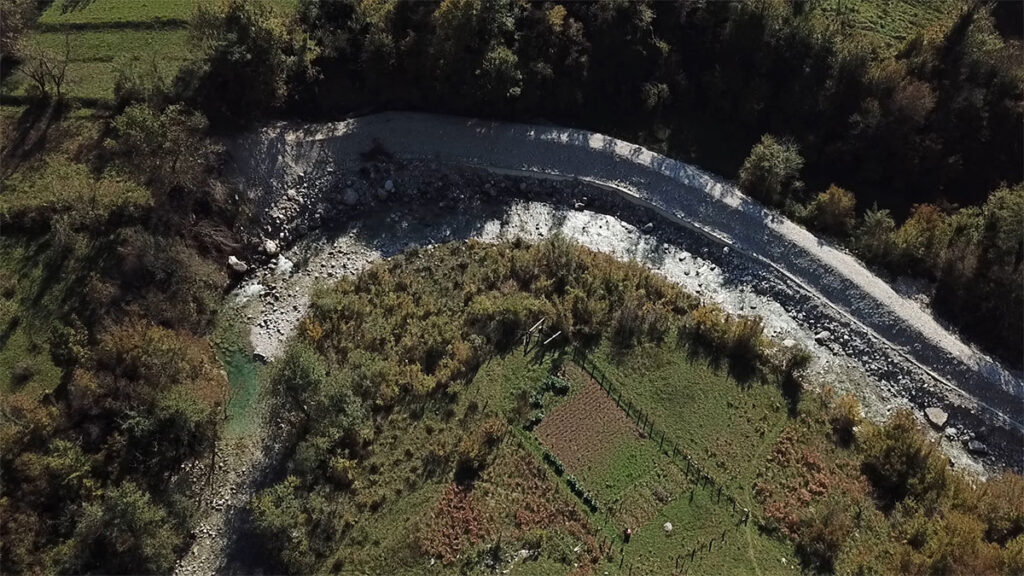 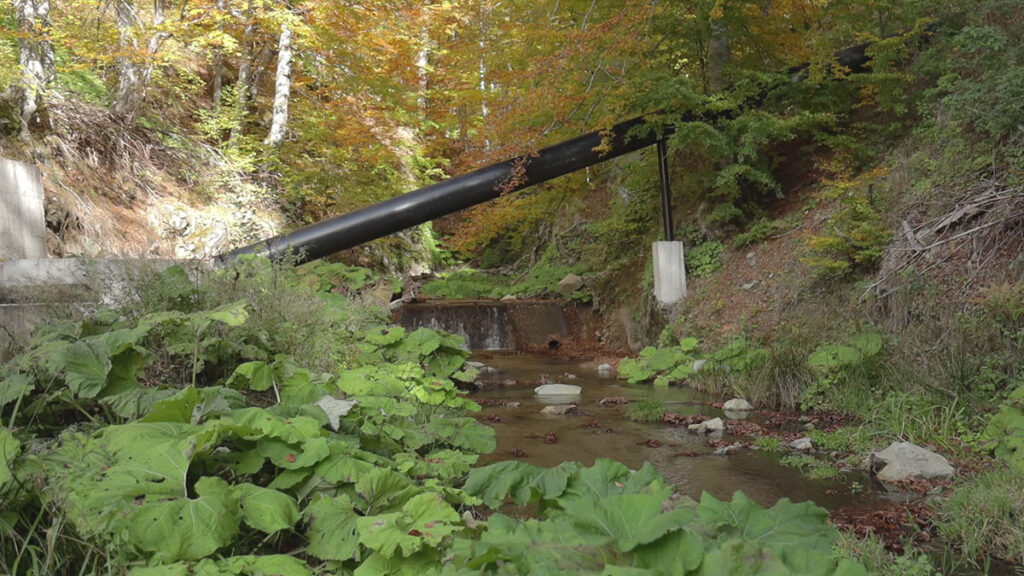 Legend: the environmentalists accurately point out the major negative effects from the operation of these small facilities: change or river flows which affects all life forms in those ecosystems, reduced water levels and even dried-up rivers, especially given the cumulative impact of multiple SHPPs in one territory.

The negative impact is also felt by the local communities whose access to water depends on the rivers on which those plants are built.

The construction in protected areas continues

The initial findings showed that the construction of one of the small hydropower plants could pollute the drinking water in the town of Tetovo.

Such construction continues, although the new Energy Development Strategy states that the construction of new small hydropower plants should be carefully assessed in terms of environmental impacts vs. the benefits of electricity generated.

We requested answers from the Ministry of Environment and Physical Planning on this issue.

They also say that during 2019 and 2020, no procedure was implemented for granting a concession for use of water for electricity generation.

The Ministry emphasizes that, following a procedure initiated by the Ministry of Economy, the possibilities for cancellation of concessions are being considered for the three SHPPs which are located in the zone of active management. The final decision on this will be made by the Government.

“In addition to the above, 5 more SHPPs are planned to be built in the area of Shar Planina mountain and decisions have been made for selection of the most favorable bid. However, whether this activity will proceed shall depend on whether the Law on Declaring a National Park will be adopted. So, it is not about bypassing, but about regulating the current situation, and together with the Law there will be also a Plan for managing and zoning and future activities in Shar Planina”, was the feedback from the Ministry.

Read more: “Transparency International“: The subsidy outcomes are not evaluated

We discussed with Adrijana Rushiti on whether the manner of funding of electricity generation from small hydropower plants brings into question the market competitiveness and is there a danger from corruption. She is a legal advisor in Transparency International – Macedonia.

The construction of small hydropower plants in all countries in Western Balkan is proceeding with full steam. Our research in Serbia and in Bosnia and Herzegovina showed incredible expansion of these energy plants.

According to the Registry of Preferential Electricity Producers of Serbia, this country has 188 hydropower plants and over 100 of them had their resolution for preferential producer issued since 2017. A total 109 mini hydropower plants are active in Bosnia and Herzegovina and Republic of Srpska and according to civil society organizations information, additional 345 energy facilities of this type are in a phase of construction and planning.

Typical for these two countries, as well as for Macedonia, is that the construction was encouraged by the European Union, that is, by the Energy Community, by imposing new regulations and an obligation to increase the generation of electricity from renewable energy sources. Favorable credit lines have been provided through European banks for construction of small hydropower plants in these areas and the countries have introduced high feed-in tariffs, explaining that this is the only way to attract investors and meet the EU requirements. At the same time, it was forgotten that with the adoption of the European legislation in the area of energy, it is also necessary to copy the environmental protection regulation. That did not happen.

The inefficiency of the Western Balkan governments in controlling the construction and operation of small hydropower plants has resulted in investor arbitrariness and destruction of rivers.

A good example of this is Sokolja, a mountain river in central Serbia, near Kraljevo, which is home to a stream trout. The residents of the surrounding area say that this place was called the “Valley of Healthy Waters” because of the 22 springs that fed water to the river. Today, the place looks different.

Despite the protests of the citizens and environmentalists in Serbia over the destruction of rivers, the government, at the end of December 2020, decided to increase the fee intended for support of the the preferential producers of electricity by five times. Starting from 2021, instead of the current 0.093 dinars per kilowatt-hour, 0.437 dinars per kilowatt-hour will be paid for electricity generated from renewable sources, which will increase the electricity bills by about 150 dinars (1.3 euros) or 3.4 percent.

Read more: The fatal fate of the “Valley of Healthy Waters” in Serbia

The inefficiency of the Western Balkan governments in controlling the construction and operation of small hydropower plants has resulted in investor arbitrariness and destruction of rivers. A good example of this is Sokolja, a mountain river in central Serbia, near Kraljevo, which is home to a stream trout. The residents of the surrounding area say that this place was called the “Valley of Healthy Waters” because of the 22 springs that fed water to the river. Today, the place looks different.

Unlike Serbia, where apparently subsidizing of small hydropower plants will continue at an accelerated pace, the government in Bosnia and Herzegovina is raising its environmental awareness and looking for a way to completely stop the construction of these energy facilities.

In an interview for “Doma”, this was announced by the Minister of Environment and Tourism, Edita Gjapo.

The announcement of the Minister came true. The Federal Government of Bosnia and Herzegovina recently decided to abolish subsidies for small hydropower plants and to transfer the funds to other renewable energy sources starting from 1 January 2021. An additional step further was announced by the new Government of Montenegro, which plans a complete ban on the construction of small hydropower plants and reconsideration of all concessions issued so far, because it turned out that only privileged individuals had real benefits from them.

These two examples show that change is possible and that increase of the quantity of electricity generated from renewable energy sources can be achieved by investing in energy facilities that will not endanger the natural environment.

This content was prepared by Institute for Communication Studies.